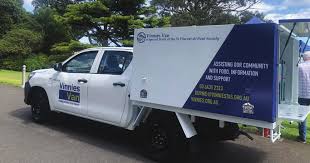 Vinnies will take delivery of a new food van in Devonport today, which will be used to support vulnerable people in the community.

The new food van will be based in Smithton, but will service much of the North-West Coast.

The van is the first of three promised across the state, by the State Government in the last election.

Deputy Premier, Minister for Community Services and Braddon MP Jeremy Rockliff says the $165,000 commitment is part of a package which also includes an increase of $60,000 a year in support for the charity over the next three years.