Syd Bunnings staffmember positive to virus - A staff member at Bunnings in Sydney's west has tested positive to COVID-19.
Flooding on NSW south coast will worsen - SES volunteers have responded to more than 200 calls and conducted seven rescues o ...
Latest on proposed cable car - The company behind a proposed cable car for kunanyi/Mount Wellington has lodged ...
NSW needs 1000 more firies, union says - A thousand more permanent professional firefighters are needed in NSW to help the ...
Man stabbed to death in Tamworth - A 21-year-old man has been stabbed to death at Tamworth in northeastern NSW.
Interstate designer bag thief nabbed - A man will face court accused of stealing more than $50,000 worth of designer hand ...
Face spray-painted during Adelaide robbery - A man is recovering in hospital after having his face spray-painted during a stree ...
Charges laid over Sydney assault - A teenager has been charged over an assault in Sydney's inner west, which left a w ...
Latest snapshot of the coronavirus impact - LATEST DEVELOPMENTS* Victoria recorded 450 new COVID-19 cases and 11 more deaths o ...
Bennett fined $20,000 for bubble breach - Wayne Bennett's Italian lunch date will cost him $20,000 to go with his two weeks ...

Tech Review: New Laptop Dares You to Be Different

ASUS have launched the new VivoBook S range and the first thing you’ll notice is their bold design choice really pays off.

This is a machine built for improving your performance on general tasks but it adds a little flair to showcase your own personality and really can’t be ignored.

I was sent the “Resolute Red” colour for review and the initial thought as I opened the box was that this is a real statement of intent from ASUS. It’s not just the bright top of the chassis that demanded attention, but also the subtle logo placement and simplistic font style show that you can have both power and style in one machine especially when you open the lid and see the splash of RGB with a yellow colour-blocked “Enter” key. Don’t worry either if “Resolute Red” isn’t your thing there are 3 other colours to choose from, “Dreamy White”, Indie Black and the nature-themed “Gaia Green” and as anyone who grew up watching cartoons like Captain Planet, “Gaia” is the spirit of the Earth, so let those powers combine. The updated precision-crafted all-metal chassis feels solid but also superbly light meaning you can show up to your class or meeting and easily remove the laptop from your bag with one hand and place it on the desk. The design is also super thin at only 16.1mm and weighing only 1.8kg with it’s diamond-cut chamfered edges this is a machine that is made for portability and adaptable in your work environment.

In a strange move, VivoBook S15/M15 also include stickers that come in a sleeve inside the box. They feature unique designs and phrases to “personalise” your laptop. While I get the concept and I’m sure there will be a lot of people who will use them, why would you want to cover up these bold and beautiful colours with any type of sticker? It just seems like an insult to the beautiful simplicity of the design to then add some “graffiti” style artwork to it and while I can appreciate some forms of the art style in certain urban situations I’d be tossing these in the bin and leaving the laptop in its natural glory. That’s art though, each to their own.

Before and after, "why not?" it asks, well.. because it looks better clean

Performance-wise I’m really happy that I was loaned the base model for the review as it gave me a clear indication of what was achievable with this machine. The 8 gig of RAM and Intel® Core™ i5-10210U processor will allow you to complete nearly all tasks. I’d be looking at a bit more grunt for graphic design or video work though. The model I used also had 3 USB ports (1x3 and 2x2), a USB-C, audio jack and a surprise inclusion of a micro SD slot, which will be great for photographers or action cam enthusiasts.

The screen is one of my favourite features, the NanoEdge 15.6” FHD LED display is so much better to look at than some of the horrible matte screens that usually come with laptops in this price range. It shows really bright colours especially when watching your favourite streaming service. I watched all of Rambo Last Blood on it via Amazon Video and it was a great way to test out those dark tones as the film shifted from night to day and vice versa. 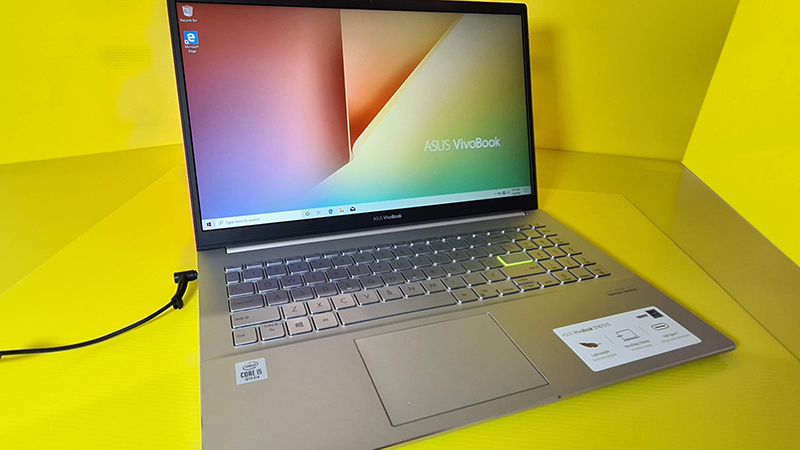 At a starting price of $1149 in most retail outlets, it’s so nice to see so much value packed in for the price and usually style and thoughtful design like this is saved for a much higher price point. Just don’t go putting stickers on it, it looks great already!